From Mexicans to Muslims, Donald Trump is running on and capitalizing on one of America's deepest original sins. Hatred, racism, bigotry, and intolerance reside at the core of the foundation and beginnings of this very nation. The scourge of xenophobia and intolerance of others, runs deep in the bowels of the American psyche dating back centuries. Whether it was hatred of the "red man", the original Native American, or hatred of the "black man", from slavery through segregation, or hatred of the "yellow man", with the Japanese Internment Camps, to today's hatred of the "brown man", Hispanic immigrants, and hatred of the "bearded man", Muslim immigrants, this xenophobic fear of others runs deep in the veins of America's blood. It is its original sin.

To see Donald Trump launch a Presidential campaign on DAY ONE by proclaiming that "Mexico sends rapists, drug dealers, and murderers" to migrate to the United States and "some, I suppose, are good people" and then to see the subsequent mass herd of followers sheepishly follow him, it was clear that he turned on a light in America's kitchen, and instead of running for cover, the cockroaches came out and sat comfortably with their feet on the couch. His ever growing following is indicative of an ugly part of America's past and also its present that implies that America belongs only to a select few, namely, white Christian men, and the rest are not welcome and need not apply. 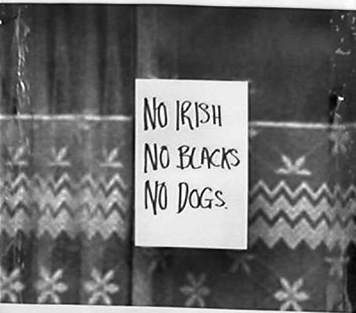 His campaign and his candidacy have made it comfortable for those who previously had to hide in the shadows and keep their racist and bigoted views under a couch, to now come out loud and proud and let their FASCIST FLAG FLY !! Though I've never been to a Ku Klux Klan rally, these Donald Trump campaign rallies give a fly on the burning cross view of precisely what I envision them to be. As the leader pokes and prods the crowd and agitates and revs them up into a frenzy with what can only be classified as hate speech to one demographic group after another, the followers yell and pump their fists with their faces red with extreme passion that often crosses over into anger. Any dissenting voices of protest are IMMEDIATELY silenced as bodyguards, security personnel, and others aggressively remove, push, kick, and dispose of anyone daring to speak out against the vitriol being spewed from the leader's lectern.

With Donald Trump's latest and most shockingly divisive statement, where he calls for a BAN ON ALL MUSLIMS coming into the United States, he has OFFICIALLY crossed over the ledge of what should be acceptable coming from a representative of one of the 2 leading political parties in this country. That one man with a microphone in front of him would have such views and shout them out loudly in public is not itself that shocking. The fact that tens of thousands of people continue to follow him from state to state and from poll to poll and cosign, highlight, and underline his every bigoted statement about Hispanics, Muslims, women, or who knows whom will come next, is deeply troubling yet sadly not surprising.

The cancer of racism and hatred of others who are "different" from the accepted, powered, and privileged class runs deeply through the core of this nation and has deep historical roots. As the years go by, one would think and also hope that this cancer would have long been cut out and removed from the body of the American psyche. However, all it takes for that cancer to return to its fully aggressive form, poised to destroy every thing within its path, are the right set of conditions. With the 2 term election of the nation's first black President, the increasing growth of the presence of ethnic minorities throughout the nation, the increasing racial, religious, and cultural diversity that is more and more representative of what America truly looks like, these are the circumstances and conditions that make some "want their country back" as they see their lilly white utopia gradually slipping away into browner and browner hands. Donald Trump didn't create this sentiment of hatred of others. He simply made it acceptable, palatable, and en vogue for those previously hiding in the shadows, to proudly showcase their scarlet letter representing America's original sin. Pray for this nation.

People in this conversation